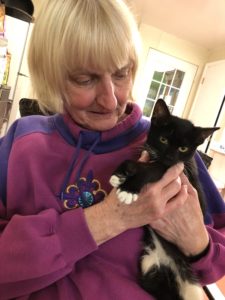 Lynn’s volunteer animal work began in her late teens and that wasn’t yesterday or the day before that!  She cleaned cages at the humane society and later served on the board of the Harrisburg Humane Society.  Lynn started The Best Little Cat House In PA in 1980 for hospice cats with no place to go. It remains one of the oldest hospice centers in the U.S.  It is all volunteer, including Lynn and there is never a charge or fee to accept a resident.  She was a founder of Central PA Spay Neuter Fund and later served on a local rabbit rescue board. For 15 years, Lynn worked under a wildlife rehabilitation expert and took in injured squirrels, wild rabbits and opossums, averaging over 500 releases per year. “Now the time has come at age 65 to realize the animal world is worse now than when I started. PennyFix is my dream to bring the dog and cat population under control before I die. I believe it can be done!”

Mikaela’s love for animals began when she was a child.  Living in a log home with a field for a backyard, she was always providing food for wayward cats that were lucky to come across her.  In 2009, she began volunteering with Castaway Critters and the following year, she started volunteering with the Humane Society of the Harrisburg Area.  Today, she volunteers with the Mid-Atlantic German Shepherd Rescue where she makes calls to potential adopters.  She also is a volunteer at the Best Little Cat House in PA and Loving Care Cat Rescue.  For the past five years, Mikaela has worked at a busy animal hospital as a receptionist and loves (almost) every minute of it.

She is one of the youngest board members for PennyFix and is extremely honored to have been chosen to help make PennyFix a success. 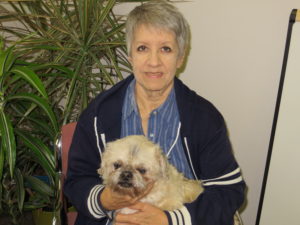 Pat first became involved in animal rescue by helping Helen Krause, first at her home in Camp Hill and later at the shelter in Dillsburg.  She feels privileged to have been a founding member of the Helen O. Krause Animal Foundation.

Recently, since its beginning in 2012, she has volunteered for the Nobody’s Cats Foundation where she has seen how TNR can be a powerful tool in humanely managing the free-roaming cat population in a local geographical region.

Having first met Lynn at their mutual workplace in a local behavioral health facility in the early 1990’s, Pat had seen her compassion for vulnerable people and later learned of her activities caring for vulnerable animals.  So she was pleased to be able to volunteer with her latest project, PennyFix, in order to help  finance sterilization surgeries for both unowned and pet animals so that the numbers of homeless dogs and cats will be reduced and, eventually, eliminated.

Join us in our mission to reduce the dog and cat overpopulation in the United States.